The first thing anyone notices before they enter any building in Shiretoko World Heritage area are the quarantine measures. These measures are not limited to Shiretoko. Every National Park or Ramsar Site Visitor Centre made everyone very aware of bringing pests into the protected areas they were visiting. One has to stand on a mat to disinfect the soles of one’s footwear. There are signs warning people not to carry alien seeds with them past the entry point. These very innovative ways certainly raised public awareness on the threat of invasive weeds and other pests entering the parks.

I learnt that there was a very big volunteer program in Shiretoko. Because the area surrounding the most popular visitor site within Shiretoko (Shiretoko-Goko- Five Lakes) was cleared for farming in the early 1900s before farming was abandoned by the 1970s. Volunteers work through the summer re- establishing the mixed forest that previously occurred there. Incidentally the lakes attract 3,000-4,000 visitors per day during the summer months (1,200,000 plus annually).

It was difficult to establish just how big a problem weeds were in Shiretoko because I didn’t know what were weeds. For example, it was spring and the height of the spring wildflowers. The fields were carpets of yellow but most of those flowers were healthy Dandelions. For a week I dismissed these as weeds until I realized that they were authentic wildflowers like the wild azaleas and the cherry trees in full blossom. The fact that weeds were not discussed in any literature we saw seems to indicate that Shiretoko’s focus was on avoiding a problem. I did notice though at Mt Nasudate National Park there were photos of the most wanted weeds they were fighting to eliminate stuck on the back of public toilet doors

Shiretoko has surprisingly much more in common with Fraser Island than at first I would have imagined. The more relevant mutual problem is that of visitor safety in the presence of the top predator. Managing dingoes is a walk in the park compared with the problems Shiretoko has protecting the public from the numerous and potentially lethal Hokkaido Brown Bears. 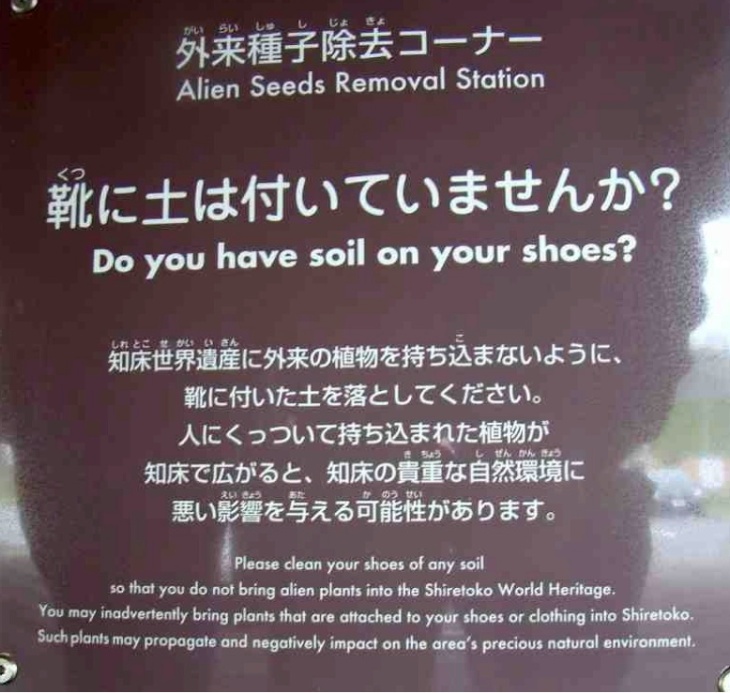