Over the last twelve months FIDO has had six different week-long teams working on bush regeneration in Eurong.  The latest group worked from 22nd to 27th April and consisted of nine volunteers from Brisbane, Noosa, Taiwan and Korea.  This was the first time that overseas volunteers have joined the effort but there regular working bees are attracting interstate volunteers.  The collective effort is progressively transforming the appearance of Eurong.   Volunteers have collectively contributed over 1200 hours to bush regeneration work in the last twelve months in addition to the environmental monitoring that has now been incorporated into this program.

The project which is supported by grants from the BMRG’s Coastal Communities program and a Caring for Country grant is also assisted by a growing number of partnerships including the QPWS, the FCRC and Kingfisher and Eurong Resorts.  Residents and landholders in Eurong are becoming ever more appreciative of the efforts made to control the weeds that have the potential to spread far and wide once established in the natural forest areas.  Many are actively assisting the volunteers in identifying problem weeds that are not readily noticed by “blow-ins” and in some cases helping to remove.  It is the cooperative operation.

The teams have almost purged Eurong of all of the Easter Cassia and fruiting Brazilian Cherries and hope that the next working bee in July can finalize these and any other potential tree weeds that might be spread by birds and spread into the natural forest.

The entrance to Eurong Resort Reception building has been transformed with the removal of the exotic species and the replacement with island grown plants.  The resort is very pleased and provided some of the accommodation as well as a complimentary meal for the whole group. The landscaping with natives has been greatly assisted by Kingfisher Resort making available 150 advanced plants from its nursery to be taken to Eurong over the last two months.  The Kingfisher nursery is working on augmenting the stock available in Eurong

The most challenging area has been the large slice of “no-man’s-land” between the Eurong Resort’s southern boundary and Second Valley.  Over a series of assaults this area has been almost purged of a huge infestation of coral creeper and other weeds but the Madeira vine in Second Valley remains a serious and unresolved problemproblem.

On the last operation FIDO volunteers planted steep roadside banks where all of the Brazilian cherries were removed during the March working bee.  This replacement planting is helping to win even more landholder support.  It is only being frustrated by the lack of available and suitable stock in the Eurong QPWS nursery and Michael Lowe is working on a project to expand that capacity and collect the requisite seed. 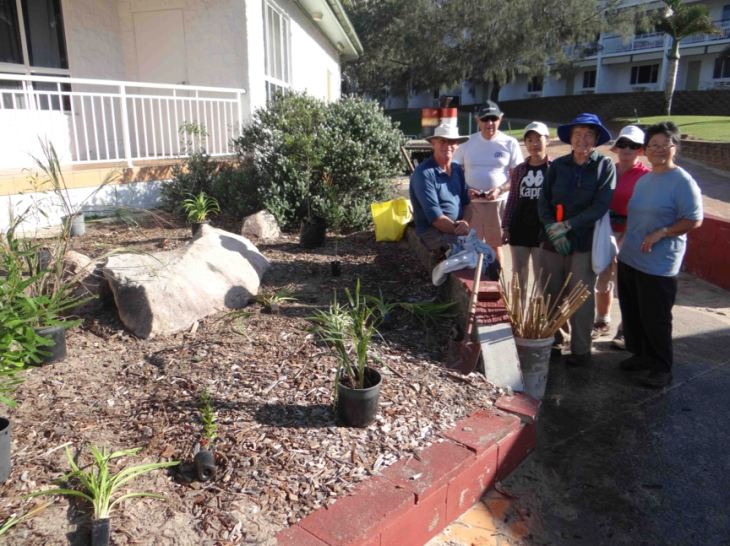 FIDO volunteers starting the planting of the gardens at the Entrance to the Reception area of Eurong Resort, a site passed by hundreds of people on a daily basis. 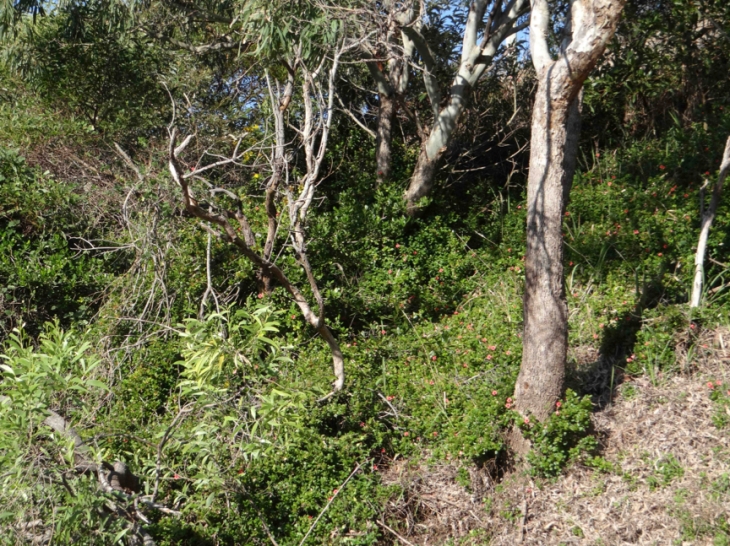 This wall of Coral creeper that occupied the hillside on the southern side of Eurong Resort extending to Second Valley has now been eliminated although follow-up is necessary.