Home » About FINIA » The Importance of Monitoring

The Importance of Monitoring

For almost two decades there has been obvious evidence of sediment flowing off the roads and creating alluvial plumes in places on Fraser Island.

This became of increasing concern to FIDO and in 2012 we were given permission to install monitoring devices to try to assess the extent of this sediment deposition.  The early results of monitoring has already raised some concerns about some impacts on Fraser Island’s natural integrity.

In August 2012, FIDO received a coastal communities grant from BMRG that enabled it to incorporate monitoring  into its established bush regeneration program based on Eurong.

On 28 November 2012 FIDO volunteers installed a number of monitoring posts near Lake McKenzie (Boorangoora).  Four were to monitor the impact of recreation on the lake beach and lunette vegetation simply by photographing sections of the beach from the precisely the same spot and at the same angle over an extended period of time.  Another two were to monitor the volume of sediment accumulating in the swale behind the lunette that has been a longstanding concern of FIDO.

A third monitoring pole, named Gunda, was also installed on the North eastern corner of the lake to assess the sediment flowing from the adjacent west bound one-way road to the lake.   Gunda is near the site of the old Forestry hut and where WWII Z Force commandos trained.   It is also the site where all tourists saw Lake McKenzie until the 1970 bus tragedy FIDO has long been concerned that sediment was flowing from the road into the lake but we had no idea of the volume or the extent.  The monitoring pole was to develop a crude measure of the accumulation of the sediment as a first step to quantifying the significance of the problem. 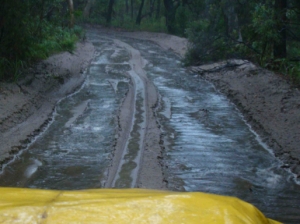 FIDO was able to observe the volume of sediment flowing down a sand track on Fraser Island on 4th March 2012 when the roads became rivers carrying huge quantiies of sand down hill.  138  mm of rain was recorded for the day.  The lakes rose by about the same amount.

Water repellance:  A common assumption is that sand is like a sponge and will absorb every drop of rain that falls on it.  That ignores that sand develops water repellence until it finally gets wet.  Water repellence will cause water to roll off the surface of the sand carrying surface sand with it,  On the roads another factor means that even when the water repellence breaks down, a hard subsurface layer makes it very difficult for rain to penetrate to any depth and thus roads with any slope are prone to becoming drains.  Thus the alluvial plumes usually form at the bottom of roads with a slope or where the water runs off the road at some point.

There is a nexus between heavy rainfall events (days when more than 12.5 mm [50 points] rainfall are registered) and run-off from the roads moving appreciable amounts of sediment.  The posts have rulers attached to help determine that nexus

Rainfall Events:  After seven months of quite dry wether on 25 January, the mini-drought was broken by ex-cyclone Oswald that was followed by a series of deluges.  In the 192 days between 15 July and 25 January when the heavy rainfall events resumed only 178.2 mm rain was measured at Eurong.  92.2 mm fell in just five days that recorded more than 12.5 mm.  Then 405mm resulting from ex-cyclone Oswald fell in just four days at the end of January and another 305 fell during 8 days of February.  Another two days of heavier rain in the first half of March when the first data was gathered yielded 61 mm.  In summary there had been fourteen (14 days that caused major runoff before the impact of that runoff was measured at the site of the datum posts. 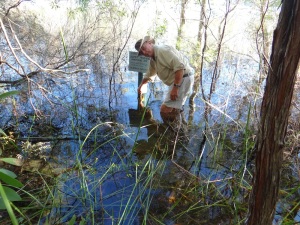 The data from Gunda:  That brings us to the measurements of sediment at Gunda.  When Gunda was installed in late November, because the lake was still very full from the three previous wet years it was located in the path of the sediment flow about two metres back from the edge of the water.  FIDO could never have anticipated that the lake would rise by almost another metre over the next three months even submerging the monitoring ruler strapped to the post to measure the accumulation of sediment.

There isn’t a large catchment for above Gunda.  The 100 metre of road up a hill is all palletted.  There are bund walls to retain any sediment at the bottom of the hill.  There was no obvious evidence of sediment overflowing the bund yet 75 mm sediment built up in that period.  Only one other monitoring site registered more sediment build up and that was the Cooloola post, the nearest one to Eurong. The volume of the sediment deposited is the equivalent of dumping many truckloads of sand into Lake McKenzie.  While it may take a few hundred years at this rate to fill the lake, it is not preserving the natural integrity of  Fraser Island if this is allowed to continue.

The solution:  The most obvious solution is to close and stop any more water running down the road to the lake.  This requires rerouting the road further away from the lake or closing the road altogether.