For the past three years, Fraser Island Defenders Organisation (FIDO) has embarked on a monitoring project on Fraser Island. Of particular concern was to try to quantify the impact of sediment movement along Fraser Island roads. FIDO established some posts to collect data on the volume of sand being deposited in some areas – mainly between Eurong and Central Station, with some measurements at Lake McKenzie (Boorangoora). At some sites we were also seeking to assess the extent of down cutting of the roads through measurement and photo-monitoring.

Sediment movement observed at the intersection of Central Station, Eurong and the Lake McKenzie link road during the passing of Cyclone Marcia. One event moved countless tonnes of sand

The assessment has been hindered by a lack of rainfall data away from Eurong and Kingfisher which record official rainfall registrations.

With the assistance of small grants through the Burnett Mary Regional Group and support from Queensland Parks & Wildlife Service (QPWS), FIDO has established very sophisticated new rain gauges at Lake McKenzie (Boorangoora), Central Station and Lake Coomboo. These not only record aggregate rainfall but the intensity of the rain. It is the intensity that is critical to the extent of scouring of road surfaces. 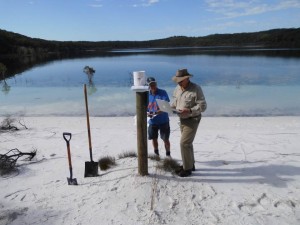 A new gauge soon to be installed at Happy Valley will enable rainfall registrations to be read on line in real time rather than having to wait to physically access these gauges to obtain readings.

The rainfall data will provide a better picture of rainfall distribution on Fraser Island and should help in natural resource and fire management. Until now we have not been in a position to know how much rainfall may vary between various parts of the island yet such information is critical for our understanding both from an ecological and a management perspective.

A new collaboration brings the University of the Sunshine Coast into the picture as they extend the understanding of the extent of road scouring and its impacts. The projects will be carried out by fourth year students under the supervision of Dr Adrian McCallum. So far, the project has involved collaborations of four different groups, but in the end Fraser Island will be the beneficiary of the project.