When FINIA was founded in December 2005, the catalyst was a two-day gathering of a large number of groups and agencies at Dilli Village, Fraser Island, organised by the Burnett Mary Regional Group.  Nobody then could have imagined that an organisation that has a set of objectives but no formal constitution, and therefore no formal membership, could have survived for so long and achieved so much just through communication and collaboration.

As an activist, over the last 10 years I have experienced at first hand the benefits brought by the cooperation between the parties to FINIA, all of which are keen to see the best outcome for the natural integrity of Fraser Island.  Below are just a few examples of these many collaborations, without which we would not have made as much progress in our efforts to maintain Fraser Island’s natural integrity.

Another team of volunteers benefit from Kingfisher Group’s support to travel to Fraser Island for work projects.

Kingfisher:  While not part of FINIA, the Kingfisher Group has made a significant contribution to Fraser Island’s natural integrity by offering free ferry travel to volunteers working on natural integrity projects on the island.  Eurong Resort offers accommodation for overflow volunteers.  In return volunteers have made a significant contribution to providing a more natural, weed-free landscape setting for the resort.  That and other parts of Eurong have benefitted from plants provided by the Kingfisher nursery. Eurong Resort’s cooperation has enabled a highly productive partnership to function with greater effectiveness in Fraser Island’s most visited single site. 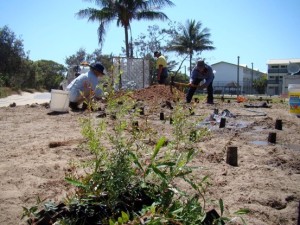 Council:  The Fraser Coast Regional Council carries out its own obligatory programs of weed control, but its collaboration to help volunteers working on Fraser Island’s weeds extends much further.  Using a BMRG and other grants, FIDO has produced some attractive and helpful guides for landholders on what to plant and what to eradicate; the Council played a key role in distributing these to relevant ratepayers. The Council also played a seminal role in transforming a barren roundabout at the entrance of Eurong into an attractive demonstration garden, which is now being extended into the resort grounds.  The Council has also provided FIDO access to storage space for its tools and equipment in a shared facility. Without this FIDO could not operate as efficiently at Eurong.

Happy Valley:  To work in Happy Valley, FIDO needed a base and storage for our equipment.  There was ready and willing cooperation from the Fraser Island Retreat.  When we needed a site for a new rain gauge in the public interest, the most suitable site was on the Resort’s property and this is another important collaboration.

QPWS Tractor and Rangers relocate the sign shelter on weeds to a more central location in Eurong.

QPWS:  The collaborations between the Queensland Parks and Wildlife Service and volunteer groups are many and varied.  When FIDO needed a sign shelter moved from one site where it was rarely seen to a more central location, this huge challenge was made easy when QPWS stepped in with a tractor to do the heavy lifting.  When a chainsaw was needed for some heavy weeds, the QPWS stepped in again.  Among other ways, they have also helped with a tractor to clean up Problem Corner and provided us with chemicals at times.  Without the support of QPWS, FIDO could not have achieved so much in Eurong.

Many other collaborations have developed.   The cooperation from residents and property owners has been greatly facilitated by the Fraser Island Association.   The facilitator in all of this continues to be FINIA, which is improving cooperation through better communication and networking between the key players working to protect Fraser Island (K’Gari’s) natural integrity.