For almost a year, FIDO and QPWS were at an impasse over FIDO’s proposal to fund a feasibility study into the building of a light rail from Kingfisher Resort to Eurong. The QPWS saw four major impediments to them supporting such a study, while FIDO remained alarmed at the down-cutting of the fragile sand roads, with the scoured out sediment ending up in other locations. 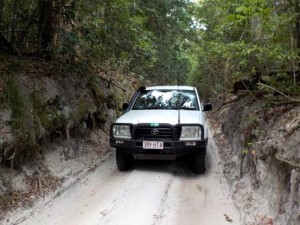 Down-cutting along 0.5 km of Woralie Track between the eastern edge of the rainforest and the turnoff to Lake Allom has carved a canyon 2 m deep. Thousands of tonnes of sand have been relocated downslope from these cuttings

FIDO estimates that, on average, every visitor to Fraser Island travelling by any form of 4WD (including buses) is responsible for stirring up more than a tonne of sand that will be scoured downslope when it rains. Some of this ends up in Fraser Island’s precious lakes.  FIDO has long been calling for a stop to the unnecessary stirring up of surface sand and, for 42 years, has been advocating a light rail alternative to 4WDs.

A meeting with Environment Minister Steven Miles on 11 April helped to resolve the stalemate between FIDO and QPWS. It was resolved that the environmental impact of road down-cutting on K’gari needs to be urgently addressed.  The agreed outcome was that FIDO will commission and pay for an independent ‘Sustainable Transport Options for Fraser Island (K’Gari)’ study.  This study will explore all options, including light rail, to reduce the current environmental impact of visitation.

Using money from the Barbara Winkley bequest that FIDO anticipates to receive in the near future, FIDO will seek to revive the GHD study commissioned in 2000 by the QPWS that was halted prematurely in 2002 just as it was nearing a critical conclusion.  The now proposed study will, among other things, update the 2002 information to determine how the state of K’Gari’s roads has changed in 15 years.