Marine turtle season is coming to an end. The adult courting males and nesting females have returned to their home areas from hundreds of kilometres abroad, and hatchlings are emerging from their underground incubation period to embark on their life journey. Only 1 in 1000 make it to maturity, around 35–50 years old.

North Fraser Island (K’gari) has a small turtle rookery with a seasonal night driving curfew, where green turtles (Chelonia mydas) and loggerhead turtles (Caretta caretta) court and breed, and females deposit their precious cargo of eggs into the dunes before leaving the young to their fate. These eggs (over 70%) also provide seasonal food resources for wildlife, including dingoes.

In December, QPWS rangers responded to a call from CTO group leader Mick, whose group came upon a nesting loggerhead turtle at Cornwells Camp Zone in a beach entrance vehicle track.  Mick and his privileged group were observing from a distance the ancient and spectacular nesting process of the now endangered loggerhead turtle. 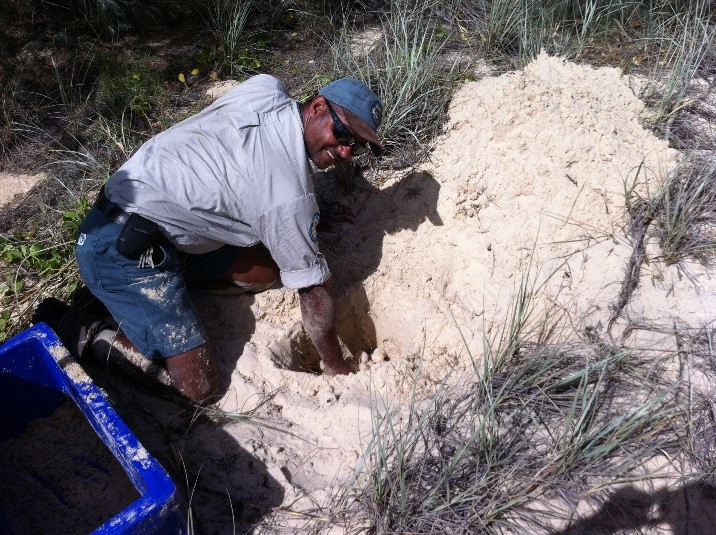 Trained rangers removed the 155 ping-pong-sized eggs from the campzone track—providing onlookers with an educational experience—and relocated the eggs to a more suitable area. Loggerhead and green turtles lay 4–5 clutches per nesting season, producing between  90 and 170 eggs per clutch every two weeks.

The loggerhead was tagged before she returned to the sea and we hope to record her in 4–5 years when she comes up to nest again, returning to the area she was hatched in.

On 10 February at 8:30pm, eight weeks to the day since the eggs were laid, rangers staked-out and witnessed the arrival of the clutch into the world. Their little heads protruding from the sand, they waited for lower temperatures before erupting out of the dune, descending to the shore and into the surf waters to run the gauntlet of waiting predators.

This year QPWS have recorded unusually high numbers of nesting turtles attempting to nest further south on the island for reasons that can only be speculated. This poses problems for vehicle traffic and turtles including the hatchlings having to journey to the sea across vehicle tracks. Marine turtles are a protected species and an animal of significance for the Butchulla people.