The Excitement of New Discoveries

Ever since FIDO’s Beach to Birrabeen BioBlitz, I have been ever alert to discover anything ‘new’ or ‘different’ on K’gari.   I was always interested, but my interest has been lifted to a new level.  Thus it was that when driving into Eurong’s Residential Valley, I spied in my peripheral vision a Caeasalpinia bonduc.  It was in a site driven and walked past hundreds of times each week.  Peter Shooter had previously discovered one very large rambling specimen the Happy Valley dump.  This was the first specimen I had seen in Eurong.  It was so much smaller but unmistakable even from a passing vehicle.  I was so excited that I rushed to get my co-workers to show them this new observation.

FIDO conducts three major week-long working bees at Eurong every year.   However this isn’t enough to stop new weeds springing up and setting seeds in the four month intervals and so Su Dawson and I with the support of the Eurong Resort have begun holding interim weed management trips to get to any new weeds before they flower and/or set viable seed.  This strategy is turning out to be most rewarding and is stopping the two steps forward and one step back progress that we had been encountering.  Our week in September was just one of those interim efforts to maintain the momentum forward.   This time Suzanne Wilson, who is a plant enthusiast, was with us.  She was there to maintain the progress in the Eurong nursery that has become her baby, but which had become infected with Flick weed.

While carrying out our closer inspection of C. bonduc we became curious about another plant about a metre away. 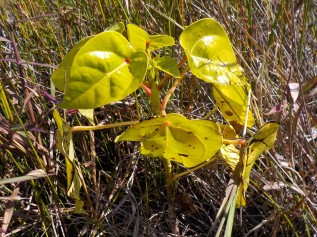 It was different to anything I had ever seen before, so I took photos of it, hoping to be able to identify it in the new expanded edition of “Mountains to Mangroves” that is being referred to with increasing frequency as we become ever more curious about K’gari’s rich variety of plants.

When we couldn’t find anything resembling it our curiosity was really aroused.  The next week I ran into two eminent rainforest specialists Hugh and Nan Nicholsen.  They invited me to send them the photo, confident that they could sort it out.  Nan’s email came back, “Our carefully considered opinion is that we don’t have a clue.“

On Nan’s recommendation I referred my imagery to expert Queensland botanist and previous member of the Fraser Island Scientific Advisory Committee, Bill McDonald.  His reply was swift and positive, “It is Thespesia populnea (family Malvaceae), a common littoral species in central and northern Queensland, but recorded down to the North Coast of NSW.”

Our mystery plant was growing at the edge of a swamp in the first swale back from the ocean beach and seems remarkably glossy and fleshy.  It was only about 50 cms tall and may be a juvenile of something larger.  Our research on the net showed that it could be much larger.

The Atlas of Living Australia describes it as, “typically reaching 6 to 10 meters in height, found widely in coastal areas of the tropics and warm subtropics from sea level up to around 150 meters elevation. It thrives on sandy coastal soil. The tolerance of Thespesia populnea of wind, salt spray, and periodic inundation with brackish water and its ability to thrive in sandy, saline soils make these trees useful as coastal windbreaks. This species is apparently native to coastal areas of the Indian and Pacific Oceans from East Africa and India to mainland Southeast Asia, Indonesia, and the Philippines. However, it now has a pan-tropical distribution, ranging from the Pacific to the Caribbean and the coast of Africa.”

When we saw the distribution map in the ALA, it wasn’t surprising that this first observation on Fraser Island doesn’t appear in the Mountains to Mangroves that covered the known flora of South East Queensland.  It will be interesting to observe the developments of these two plants.