Laura Simmons and Yoko Shimazu, doctoral students at the University of the Sunshine Coast prepared a monitoring plan that was submitted to FINIA and at the FINIA meeting in October 2012 it was agreed that the Fraser Island Defenders Organisation would install the monitoring stations as part of its next scheduled working bee on fi in the week 25 November to 1 December 2012. The monitoring site and procedures were examined during a site inspection in October 2012.

On 28th November the four poles were placed in their respective positions and GPS locations recorded. Following that and a prolonged dry period in the latter half of 2012 there were a number of heavy downfalls that contributed to a rise in the level of the lake beginning with ex-cyclone Oswald at the end of January.

Location: This site was high on the lunette of the main beach near the head of a small sandblow to the west of the main stairs. It is able to sight up on the same focal point used for sighting from Boorangoora #2.It’s high and unobtrusive and in a blowout area of the lunette to be able to assess the human traffic in this bared area and if there are any adverse impacts on the site.

On 15th March 2013: In the intervening 15 weeks since the monitoring posts were installed the region experienced heavy rainfall, particularly from ex-cyclone Oswald and the water level in the lake rose approximately one metre shrinking the area of dry beach. 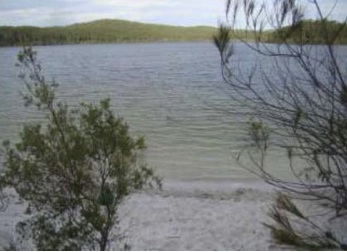 To see a gallery of images from this project Click Here
For more information about Lake McKenzie (Boorangoora) Photo Monitoring Project. Click here