University of Queensland scientists are calling for greater international collaboration to save the world’s migratory birds, with research finding more than 90 per cent of species are inadequately protected due to poorly coordinated conservation efforts.

The Australian Research Council Centre of Excellence for Environmental Decisions (CEED) research team found many species of migratory bird were at risk of extinction due to habitat loss along their flight paths. 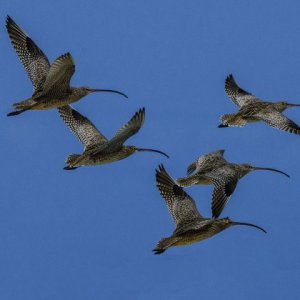 The Far Eastern Curlew are suffering rapid declines from loss of habitat along their flight path between Siberia and Australia. Photo: Dirk Hovorka.

Dr Claire Runge, from UQ’s School of Geography, Planning and Environmental Management, said more than half of all migratory bird species travelling the world’s main flyways has suffered serious population declines in the past 30 years. “This is due mainly to unequal and ineffective protection across their migratory range and the places they stop to refuel along their routes,” she said.

The research found huge gaps in conservation efforts to protect migratory birds, particularly across China, India and parts of Africa and South America.

Dr Runge said a typical migratory bird relied on many different geographic locations for food, rest and breeding. “So even if we protect most of their breeding grounds, it’s still not enough. Threats somewhere else can affect the entire population,” she said. “The chain can be broken at any link.”

Dr Runge said birds undertook remarkable journeys, navigating across land and sea to find refuge as the seasons changed. “This ranges from by bar-tailed godwit endurance flights exceeding 10,000 kilometres to the annual relay of Arctic terns, which fly the equivalent distance to the moon and back three times during their lives.”

The team examined more than 8200 important bird and biodiversity areas internationally recognised as significant locations for migratory bird populations, finding that just 22 per cent were completely protected, and 41 per cent only partially overlapped with protected areas.

UQ School of Biological Sciences Associate Professor Richard Fuller said the study highlighted an urgent need to coordinate protected area designation along the birds’ full migration route. “It won’t matter what we do in Australia or in Europe if these birds are losing their habitat somewhere else, as they will still perish,” he said. “We need to work together far more effectively around the world if we want our migratory birds to survive into the future.”

The study, Protected areas and global conservation of migratory birds, is published in Science.

Reproduced, with thanks, from UQ News, https://www.uq.edu.au/news/article/2015/12/weak-links-push-migratory-birds-toward-extinction

By finiaadmin in Research, Science on February 29, 2016.
← Launch of the Community Heritage and Icons Grants programme 2015-16 funding round Call for Volunteers to work on K’Gari, Second Half 2016 →