Home » Fraser Island Defenders Organisation » This one’s for the birds…

This one’s for the birds…

During the first field trip by the Maryborough and Bundaberg Wildlife Branches to Fraser Island (K’gari) in November 1968, in 24 hours the group positively identified 65 species of birds.  Admittedly, the trip was led by outstanding naturalist and keen birdo, Eric Zillman. 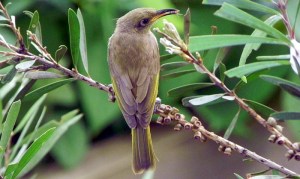 Over five days of Easter, 49 years later, I became increasingly aware of the dearth of birds, despite doing considerable movement through the bush and along the beach.  I estimate that I would have seen or heard only about 20 species.  Many birds that were very common back in 1968, such as White-cheeked and Brown Honeyeaters, weren’t seen over Easter.  I can recall times when I could identify the calls of about a dozen species in the dawn chorus before rising from my bed.  However, as our base camp was in scrub near Lake Allom and not the beach, this subjective observation has set me on a quest to establish how accurate my assessment was.

I have been working along this walking track since 2010 and on other projects over the decades and have noted the dawn choruses becoming progressively more muted and the number of bird sightings becoming less frequent.  This Easter, it really struck me just how few birds we were seeing and hearing.  The matter was of such concern that I had a friend dig through the archival records of that field trip in the ‘Wambaliman’ newsletter where the records were published.  In future visits to the island, I will be far more diligent about keeping bird lists, but I doubt that anyone will see 65 species in 24 hours on K’gari again, no matter how observant they are.  My observations are based on recollections over half a century of extensive observations on this amazing World Heritage island.

I believe that maintaining a database of K’gari bird sightings should also be a Citizen Science Project for FINIA for the next few years.  FIDO plans to start a spreadsheet, using the 65 species listed in 1968, to compare this with subsequent bird lists garnered over visits to the island to see how more deliberate observations compare.  Anyone keeping bird lists (or with any old bird lists for Fraser Island) should send them to John.

Editor’s note: QPWS also keeps a record of all bird species recorded on Fraser Island (K’gari) which are held in the WildNet database.

By finiaadmin in Fraser Island Defenders Organisation, Science, Surveys & Monitoring, Wildlife Management on June 7, 2017.
← The final straw – a subject for deflation Where has K’gari’s rainfall gone? →