Where has K’gari’s rainfall gone?

Citizen science has an enormous amount to contribute, as recently demonstrated when a Darwin mechanic discovered a new planet.  Similarly, citizen science has a lot to contribute to our understanding of K’gari.  For example, the driest year on record caused my son Keith and I to go poring over rainfall records.  We thought that we would start with doing a detailed examination of Double Island Point, which is the closest place to the island with records going back for more than 100 years.  What we found astonished us; it was a revelation. 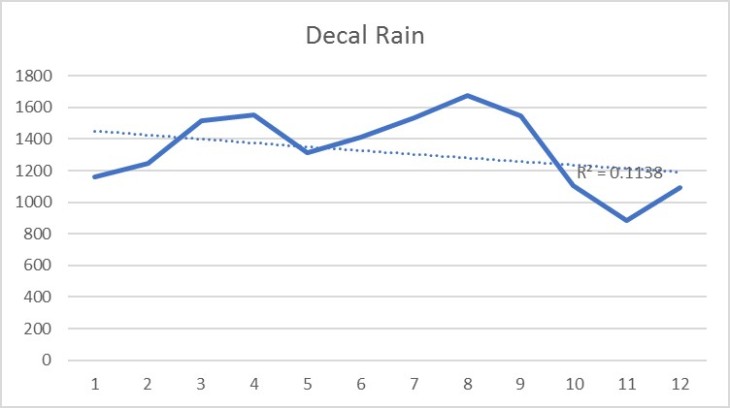 When we started analysing the data from the Bureau of Meteorology site, we discovered that the rainfall at Double Island Point has been in a slow progressive decline since recording began.  There have been annual fluctuations, which make observations difficult.  By evening out these fluctuations to 20-year averages, we were able to get a more coherent assessment of the rainfall.  Our surprise came when Keith applied a trend line to the rainfall.  The graph below indicates that the trend of Double Island Point annual rainfall has fallen from more than 1400mm in the 20-year period beginning in 1891 to about 1200mm for the last period.  This is a very disturbing trend and required further examination. By applying the same analysis to two other long-term weather stations close to K’gari, Sandy Cape and Maryborough, close to parallel trends were noted.

The implications for K’gari from this simple exercise are that we need to be preparing for a decline in annual rainfall.  The unknown is by how much rainfall will fall.  To help us in this, FIDO has embarked on a program to install online weather stations at more points around K’gari to give us a better understanding of rainfall distribution.

By finiaadmin in Climate Change, Fraser Island Defenders Organisation, Science, Science, Surveys & Monitoring on June 10, 2017.
← This one’s for the birds… Persistence Paying Off →