For those of you interested in keeping up with current research, this paper was recently published in the Australian Journal of Zoology by Linda Behrendorff, Luke K.-P. Leung and Benjamin L. Allen. 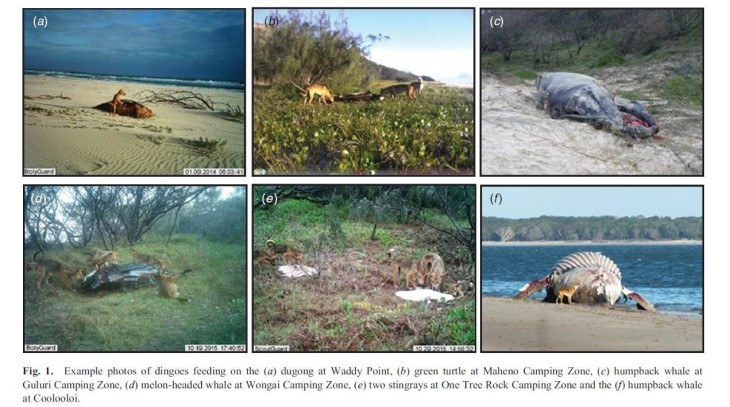 Stranded marine fauna have been identified as a potentially significant food resource for terrestrial carnivores, but how such subsidisation influences terrestrial species ecology is not well understood.

The paper describes the dietary and behavioural responses of dingoes (Canis familiaris) to the occurrence of large-animal marine strandings (e.g. dead cetaceans, marine turtles and pinnipeds) between 2006 and 2016 on K’gari (Fraser Island), Australia, to better understand the trophic links between marine and terrestrial systems.

A total of 309 strandings were recorded during this period (~3.1 strandings per month), yielding an annual average of 30.3 tons of available carrion to the 100–200 dingoes present on the island. Carcass monitoring with camera traps showed that dingoes used carcasses almost daily after a short period of decomposition.

Whole packs of up to seven dingoes of all age classes at a time were observed visiting carcasses for multiple successive days. These data demonstrate that large-animal marine subsidies can be a common, substantial and important food source for dingoes, and that the estimated daily dietary needs of roughly 5–10% of the island’s dingo population were supported by this food source.

Data suggests that marine subsidisation can influence terrestrial carnivore diet, behaviour and abundance, which may produce cascading indirect effects for terrestrial ecosystems in contexts where subsidised carnivores interact strongly with other species.